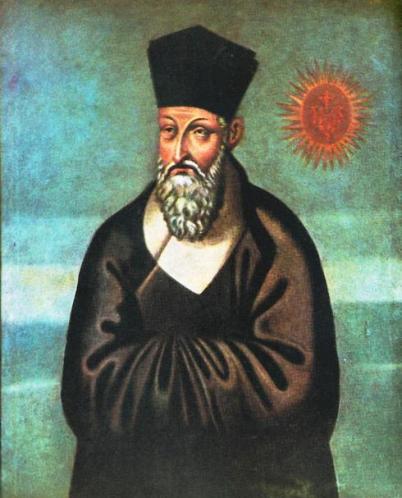 I learned with joy that in this diocese various events have been planned in both ecclesial and civil milieus to commemorate the fourth centenary of Fr Matteo Ricci of the Society of Jesus' death in Peking on 11 May 1610. On the occasion of the opening of this special Jubilee Year, I am pleased to send my cordial greeting to you and to the entire diocesan community.

Born in Macerata on 6 October 1552, Matteo Ricci, a Jesuit endowed with profound faith and extraordinary cultural and intellectual gifts, spent long years of his life building a fruitful dialogue between West and East, while at the same time effectively implanting the Gospel in the culture of the great People of China. Today, too his example continues to be a positive model in the encounter between the European and Chinese civilization. I therefore willingly join those who are commemorating this generous son of your region, an obedient minister of the Church and a daring and intelligent messenger of Christ's Gospel. Given his intense scientific and spiritual activity, it is impossible not to be favourably impressed by his innovative and special skill in bringing together with full respect China's cultural and spiritual traditions in their totality.

Indeed, this was the attitude that distinguished his mission, which aspired to seek the harmony possible between the noble, thousand-year-old Chinese civilization and the Christian newness which is the leaven of liberation and authentic renewal in every society, since the Gospel is the universal message of salvation destined for all people, whatever the cultural and religious context to which they belong.

What contributed to making his apostolate original and, we might say, prophetic, was undoubtedly the profound sympathy he felt for the Chinese and for their history, their culture and their religious traditions. It suffices to mention his Treatise on Friendship (De amicitia - Jiaoyoulun), which met with great success from its first edition in Nanking in 1595. A model of dialogue and respect for the beliefs of others, this fellow countryman of yours made friendship the style of his apostolate over the 28 years of his stay in China. The friendship he offered was reciprocated by the local populations thanks precisely to the atmosphere of respect and esteem that he sought to cultivate, concerned to become ever better acquainted with the traditions of the China of that time. Despite the difficulties and misunderstandings he encountered, Fr Ricci chose to stay faithful to this style of evangelization until his death, putting into practice, it might be said, a scientific methodology and pastoral strategy based, on the one hand, on respect for healthy local customs that the Chinese neophytes were not obliged to abandon when they embraced the Christian faith and, on the other, on an awareness that the Revelation could perfect and complete them even better. Moreover, it was on the basis of these convictions that, like the Fathers of the Church in the Gospel's encounter with the Graeco-Roman culture, he organized his far-sighted work for the inculturation of Christianity in China, seeking constant understanding with that country's scholars.

I warmly hope that the Jubilee events in his honour meetings, publications, exhibitions, lectures and other cultural events in Italy and in China will afford an opportunity for deepening the knowledge of his personality and activity. Following his example, may our communities in which people of different cultures and religions live side by side grow in the spirit of acceptance and reciprocal respect. May the memory of this noble son of Macerata also be an incentive for the faithful of this diocesan community, learning from him to reinforce that missionary dynamism which must motivate the life of every authentic disciple of Christ.

Venerable Brother, while I express my fervent good wishes for the successful outcome of the Jubilee Celebrations scheduled to begin next 11 May, I assure you of my remembrance in prayer and, as I invoke the motherly intercession of Mary, Queen of China, I cordially impart my Blessing to you and to all those entrusted to your pastoral care.